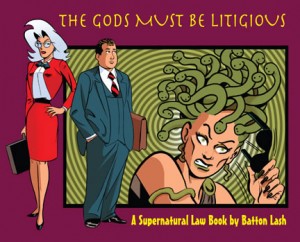 The Gods Must Be Litigious

This book is currently unavailable for purchase

When the Medusa decides to write a book — watch out! The Gorgon of Greek mythology, whose glance can turn people to stone, has been creating controversy on Earth as a bestselling author. Her highly opinionated How to Talk to a Mortal (If You Must) has brought her speaking engagements, TV talk show appearances — and lots of enemies! One of her most outspoken critics is editorial cartoonist Red Thrall, who is unrelenting in his cartoon attacks. Will the Medusa reach her breaking point and turn him to stone? How long will Zeus tolerate all this nonsense on Earth? Looks like Medusa’s going to need some lawyers! And those lawyers are of course Wolff & Byrd, Counselors of the Macabre.